Howdy stranger! As I’m writing this, it’s 6:30 AM on a Saturday so I apologize in advance if nothing I say today makes any sense. I’m not sure there’s really enough coffee in the world to make my brain function well this early on the weekend. Want to know why I’m up right now? Well, Thing Cat gifted us with not one, not two but THREE bats throughout the course of the night. Live ones. I have no idea how she catches them (seriously have you ever tried to catch a bat? I have! It’s super difficult. In case you were wondering about my newly developed bat catching skills the process basically consists of standing by an open door and giving verbal encouragement to the bat to utilize said door.)

Intense maxed-out pigment plus unstoppable crease-proof wear…it’s official, we have a forever crush on this metallic eyeshadow!

When you touch it, you just know this shadow is something special. To develop the plush, creamy formula, we pushed the boundaries of long wear and high-pigment—needless to say, we gotta have both! Just because it had never been done before, doesn’t mean it isn’t possible…and Metal Crush Eyeshadow is here to prove it!

Kat’s proprietary formula features Color-Soaked Concentrate™, the result of a technique in which pigment-saturated powders undergo a unique tumbling process that softens and smooths each particle until creamy and lustrous! This brings you the highest possible levels of pigment and pearl in an ultra long-wear shadow!

With a polished metal finish and 11 super-charged shades, Metal Crush Eyeshadow glides smoothly across the lids for insane payoff and super-intense pigment!

I feel like this is all actually just a little bit gimmicky. From what I can tell, this line is comprised of several really pretty metallic shadows that do have a “creamy lustrous” consistency, but I’m not so sure that it’s anything revolutionary. They feel quite slick to the touch which made me think that they are one of the formulas that have a high dimethicone content. When I tried to look it up, I learned that KVD doesn’t put the ingredients on their website OR on Sephora’s website which is a bummer. I had already tossed the packaging from Thunderstruck but I was able to find a photo of the packaging and lo and behold, right after talc, dimethicone is listed. For me, dimethicone heavy eyeshadow performs pretty consistently across several brands. The color will be saturated and slightly more difficult to blend. It will also crease on me without a primer. It isn’t my favorite thing in the world but it by no means makes for a bad eyeshadow and plenty of people really love a dimethicone formula.

As far as this particular shade goes, it’s a lovely highlight shade with a golden red duochrome that is really gorgeous. I generally use this as an inner corner highlight but I’ve also used it all over the lid and as a cheek highlight (not for the faint of heart!). This shadow is amazing when applied over other shadows as well. I only discovered this yesterday and didn’t get a great photo of it, but when I applied it over Jelly from the Too Faced Peanut Butter and Jelly palette (it’s a bright pinky purple), it was completely magical. I’ll have to play around with some more layering now that I know. 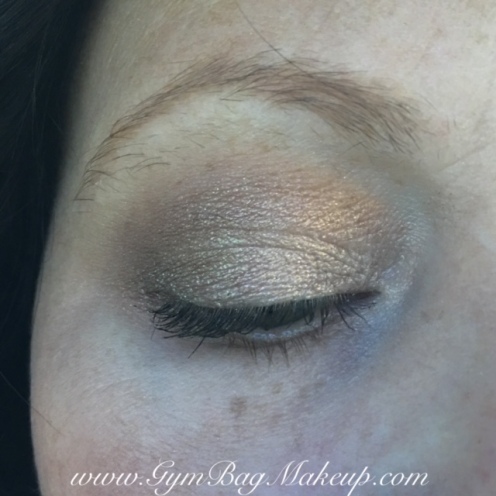 As an inner corner highlight I have no issues with this lasting all day. As a lid shade, like I mentioned, I do experience a little bit of creasing. With this particular shade I don’t really prefer to wear it all over my lid so it’s not a big deal, but I don’t see myself purchasing any of the other shades in the line because of the creasing issue.

I thought initially that this might be similar to Shiro’s Cake! but it’s a fair bit more gold and pearl where Cake! is a red/pink and gold.

I’m not sure that anyone needs to have Thunderstruck in their collection but it is definitely a really pretty shade and has been my go-to inner corner highlight for the last several months. That being said, this puppy is $21.00 which seems quite high for just an inner corner highlight. On the other hand at 2.8g of product, this will last forever and I can pass it on to my grandchildren when I’m gone.

Do you have Thunderstruck? What’s your go to inner corner highlight? Do you have an eyeshadow that you use as a face highlight or vice versa?