I was fortunate enough to get to take a three week trip to South Africa over the holidays and I want to share some of my photos from the trip (this post is fairly photo heavy…but it could have been worse, I took something ridiculous like 300 photos. But fear not, this is a heavily edited photo sampling! You’re welcome.)

Now, I’m just a small town girl at heart and this was my first trip out of the US (exciting, I know!) so there were so many amazing aspects of this trip for me. We spent a fair bit of time with family which was wonderful and we actually got to see a fair bit of the country in the time that we were there which was incredible.

After visiting family near Johannesburg, we drove up to Kruger park (lots of photos of wildlife if you missed that post) and that was one of the most beautiful road trips I’ve ever taken.

If you’ve ever seen the film The God’s Must Be Crazy, you might recognize God’s Window from the end of the film. It was absolutely one of the most beautiful places I’ve ever been. 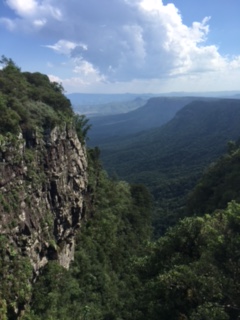 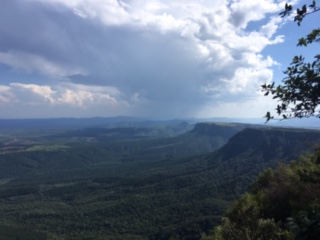 After going to God’s Window, we stopped at Bourke’s Luck Potholes which is part of the same nature reserve and another stunning location.

This was actually a big day for us. The drive from Joburg to Kruger was something like 3-4 hours but we stopped at so many beautiful places along the way. We also went on a tour of some caves and we stopped for coffee at Pilgrim’s Rest.

After Kruger Park, we drove down to Durban and spent some time there with family over Christmas then we flew down to Cape Town for New Years.

We were weenies and rode the cable car up to the top of Table Mountain rather than hiking. The time quote that we were given for the length of the hike to the top was “anywhere from 30 minutes to 4 or so hours”. That seemed a little sketchy and we were not really prepared for the “or so hours” bit.

I really know nothing about flowers but these gorgeous purple flowers were growing out of cracks in the rock.

We also hiked up Lion’s Head and watched the sunset.

We did walk up all of the multitude of steps to reach the lighthouse at Cape Point and then we played in the ocean at Cape Of Good Hope. I’d never been to an ocean where there are pools and that’s an entirely different experience! There were tiny starfish and anemones and blue bonnets and it was really beautiful. 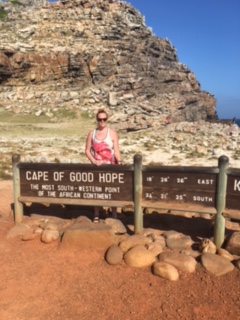 I look like I’m alone but I had to stand in line for this picture and immediately prior to my turn for a photo, a huge bus of tourists pulled up, jumped in front of every one in line (they were a huge hit with basically everyone) took a massive group photo and then got back on the bus and left. It was like a tourist tornado.

That is the face of someone that just walked up steps for a half mile and is now ready for a nap.

On new years day we drove through Stellenbosch and looked at all of the wineries then drove through Franschhoek which was breathtaking.


There of course were some not so beautiful things in South Africa as well. Particularly in Johannesburg (but everywhere to some extent), there are walls topped with electric barbed wire around every house because the crime rate is quite high. There were squatter camps that sometimes extended for miles. One of the important things about traveling somewhere new is that you see how truly blessed you yourself are. The poverty and violence were heartbreaking. South Africa is such a beautiful and diverse country and the people are all such an incredible people, but there is such a sense of turmoil and unrest and conflict. It was definitely not something that we see here in the US and on a personal level it was a reminder to be careful of how I treat the people around me and to approach all of my interactions with people with love and compassion. We definitely could use more understanding in this world.

Thank you for stopping by and sharing my vacation photos with me! I hope you enjoyed them!